The world of oysters is like the world of wine. It takes experience and knowledge to fully appreciate the complexity that each oyster brings to your table. There are a vast number of flavors, textures, and finishes that you can experience based on where an oyster is grown. Much like wine, the conditions of the “soil” or, in the oyster’s case, water and sediment, determine the flavor of the oysters. Check out this oyster flavor chart from pangeashellfish.com to get an idea of just how complex and amazing oysters are. 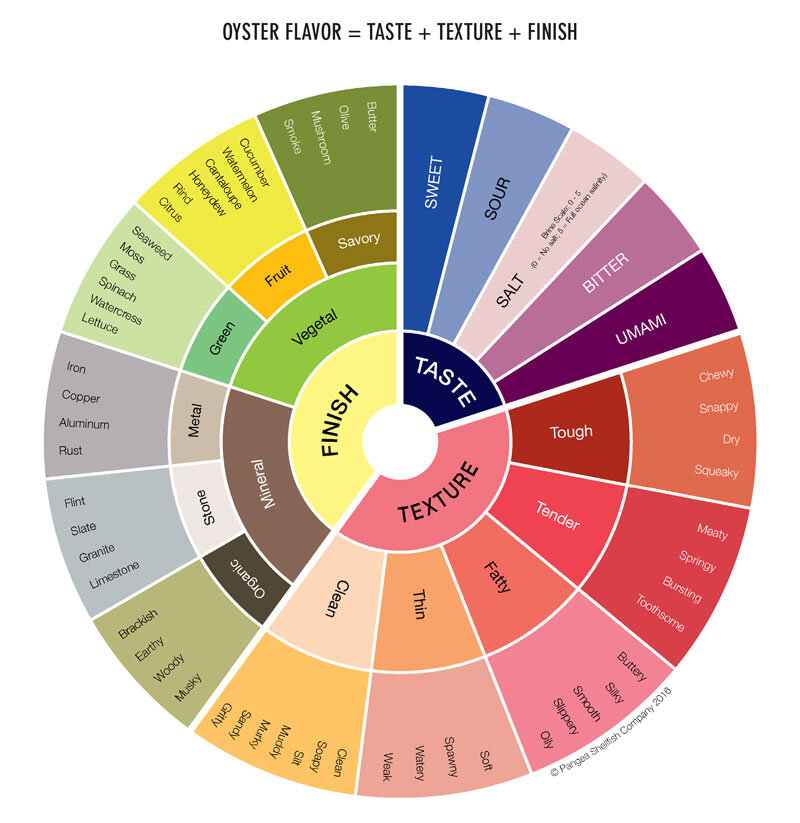 In general, there are two main families of oysters, Ostreidae and Pteriidae. All “true” oysters are in the family Ostreidae, which are the edible oysters, and are different than pearl oysters, also called Feathered Oysters, in the family Pteriidae. While named “edible oysters,” you can also eat the meat from pearl oysters, though somewhat unusual because the entire pearl oyster is typically deconstructed into all of its parts for various industries. They are broken down into pearl, shell, and meat, so the meat with the shell is not common and typically the farmers/fishers eat the meat or it’s sold to local restaurants.

Edible oysters, at least in the United States, are typically grown on either the West Coast or the East Coast, which each bring a unique quality and flavor to the oysters. There are 5 species that are cultivated in the United States that you will encounter. One of the main differences between the coasts are what species are cultured. The East Coast has one native oyster that is cultivated, called the “Eastern” (Crassostrea virginica) and one non-native that is called “European Flat” (Ostrea edulis). The East Coast native, Eastern (or Virginica), is found from New Brunswick down to the Gulf of Mexico, and the non-native, European Flat, is cultivated in Maine. The Eastern oyster is very common, but the European Flat is very rare to find due to its particularity of growing in perfect conditions. The West Coast has one native oyster as well, called “Olympia” (ostrea conchaphila) and is found from British Columbia to Baja Mexico. The West also has two other non-native species, originally from Japan, that are cultivated. One is called “Pacific” (Crassostrea gigas) and the other “Kumamoto” (Crassostrea sikamea). The Pacific oyster makes up 97% of the global oyster production due to its quick growth, disease resistance, and general hardiness. The Kumamoto is a smaller oyster that prefers warmer waters. The Eastern is also grown on the West Coast, but is more rare.

One of the coolest things about oysters, is that, just like wine, the “region” or body of water that the oyster is grown in has a large impact on the flavor. The flavor is also called “merroir,” and is influenced by how much fresh water is nearby (making the oyster less salty), the minerals of the rocks and sediment nearby, the amount of seaweed that is nearby, and even the type of algae the oyster is filtering. There are thousands of locations that oysters are cultivated on the East and West Coast that are available in the U.S., meaning there are thousands of minute flavor differences among the 5 species cultivated. In very generalized terms, and we mean very, West Coast oysters tend to be sweeter, and East Coast oysters tend to be saltier. If you want to read more about the specific merroir of each of the 5 species of oysters grown in the U.S., you can read more from Element Seafood.

Here at Feast, we get the freshest, and most diverse oysters we can get our hands on to give you an incredible experience trying oysters from all over the country, each with a unique taste so you can find the one that you love the most. We highly recommend trying at least two of each of the oysters that we have to try one “naked” (without condiments) and then try it with the condiment that you think it may need to make it suit your taste buds more– sometimes they just need a squeeze of lemon. We can also recommend a drink pairing if you want to get the full experience!

Come check out Feast’s Raw Bar and get some delicious oysters to share with a group and share your new-found knowledge!

At Feast, we are big believers in giving back to our Bozeman community. That is why every Wednesday and Sunday we give 10% of oyster sales to a deserving organization. For the month of July, we are giving back to the Carbon County Disaster Relief Fund, through the Red...

END_OF_DOCUMENT_TOKEN_TO_BE_REPLACED

Your table is waiting at Feast Bistro! Our featured entree this weekend is a bourbon, honey, and apricot grilled Cornish game hen, cinnamon scented roasted tomato rice with local chorizo, broccolini, and herbed yogurt. - Life is Delicious at Feast

Feast is open for dine-in from 5-9 pm Monday - Sunday and will accommodate to-go orders as we are able.